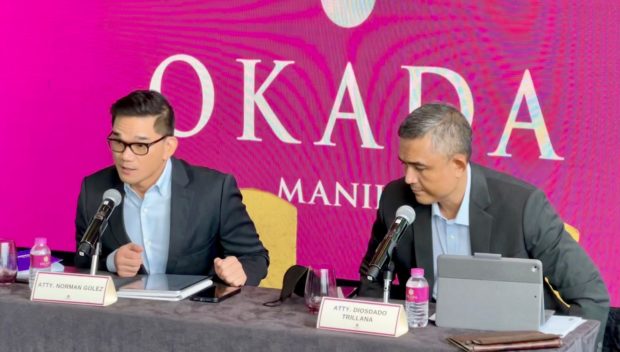 Norman Golez and Diosdado Trillana, lawyers for businessmen Kazuo Okada and Antonio Cojuangco, brief the press Monday morning July 11 on the controversial takeover of the Okada Manila casino on May 31. DAXIM LUCAS

MANILA, Philippines — Businessman Antonio “Tonyboy” Cojuangco — who played a key role in ousting Kazuo Okada from Okada Manila’s board in 2017 — has finally “seen the light” and switched allegiances to help the controversial Japanese gambling magnate regain control of the property.

So said the resort’s lawyers, who briefed the media Monday, July 11, six weeks after the Okada-Cojuangco tandem took control of Okada Manila, even as they disputed the accounts. that the takeover had been carried out in a violent and forceful manner. as alleged by the expelled directors.

“In 2017, Mr. Okada was removed from his post. There were just too many lies,” said lawyer Norman Golez who represents the Okada-Cojuangco camp. “Naturally, Mr. Cojuangco at the time was not on Mr. Okada’s side.”

Okada was removed as chairman of the casino he founded in 2017 by its board of directors, accused of embezzling $3.1 million of company funds for his consulting fees and salary.

The case was later dismissed by the Court of Appeal. Okada, meanwhile, has also filed counter-charges against Cojuangco and other directors of Okada Manila.

But Golez said Cojuangco has since changed its mind, helping the gambling mogul regain control of the property on May 31.

“Slowly but surely, after due process, as there are several cases pending in different courts [around] the world, not just here in the Philippines – we believe that after meetings with Mr. Okada, he finally saw the light,” he said.

Golez also countered statements by recently ousted directors that Okada only owns one share in the company and, as such, has no right to take a majority stake.

“They always say he only has one share,” he said. “That’s not true. It’s very misleading.

Golez explained that Okada, while holding only one nominal share in his name, was appointed sole representative of Tiger Resorts Asia Limited which, in turn, owns 99.9% of the shares of Tiger Resorts Leisure Entertainment Inc. (TRLEI) – the company that directly owns the hotel-casino.

The attorney explained that there are ongoing cases in Japan where Okada is engaged in a fight with his son for control of the business empire which includes disputed ownership in Pagcor Entertainment City.

“At the end of the day, there are pending cases that have yet to determine who is the true legal owner and beneficial owner of substantially all of the shares of Okada Manila or TRLEI,” he said. .

“Finally, after [weighing] all of this, Mr. Cojuangco was convinced,” Golez said, explaining the businessman’s turnaround.

He added that the new management must first focus on protecting the well-being of the casino’s more than 5,000 employees as well as the viability of the business, hence the six-week delay in informing the public. On the question.

“But now is the time to speak up,” he said, explaining that they fear the public will believe the “lies” repeatedly spread by the other side.

LOS ANGELES, CA – An attorney hired by the City Attorney’s Office pleaded guilty Friday to a federal bribery charge in a scheme involving $2.2 million in bribes and kickbacks to the executive superior of the Los Angeles Department of Water and Power in exchange for a lucrative contract. Paul O. Paradis, who represented the […]

The January edition of the Lake County Bar Association’s monthly newsletter, The Minute Sheet, showed how fierce the ongoing talent war has become in the legal profession – 21 help-seeking ads were posted mostly by law firms in northwest Indiana looking for attorneys. Most ad firms wanted to gain experience with vacancies covering a wide […]

From Godwin Tsa, Abuja A lawyer, Anighoro Mathias, has challenged the judgment of the National Labor Court, ordering the immediate revision to the increase of the judges’ salaries on the grounds that it was pronounced outside the jurisdiction and should be annulled on the spot . Justice Osatohanmwen Obasaki-Osaghae had in her judgment ruled that […]