By Stephen Wynn-davies for Mailonline

A young lawyer has launched vegan hemp-based court wigs and is selling them to fellow lawyers for £600 each.

Samuel March is the mastermind behind the biodegradable headwear he offers as an alternative to traditional horsehair headwear.

He reportedly sold ten of the wigs to fellow lawyers who would normally wear the traditional variety.

They cost £600 each – a higher price than some of the usual equine hair wigs which can be bought for up to £466 online.

The traditional wigs worn by lawyers in England and Wales in criminal cases date back to the 17th century and from 1822 involved the use of white horsehair.

Junior barrister Samuel March models the new vegan wigs, made from hemp, which sell for £600 each 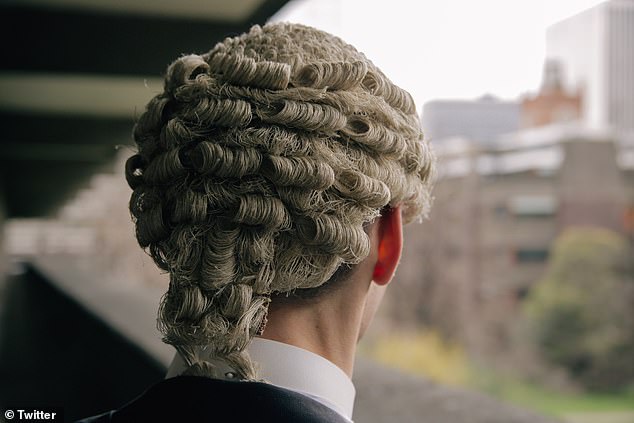 The new wigs are made from hemp which comes from the same plant species as cannabis but contains low levels of tetrahydrocannabinol (THC) – less than 0.3% 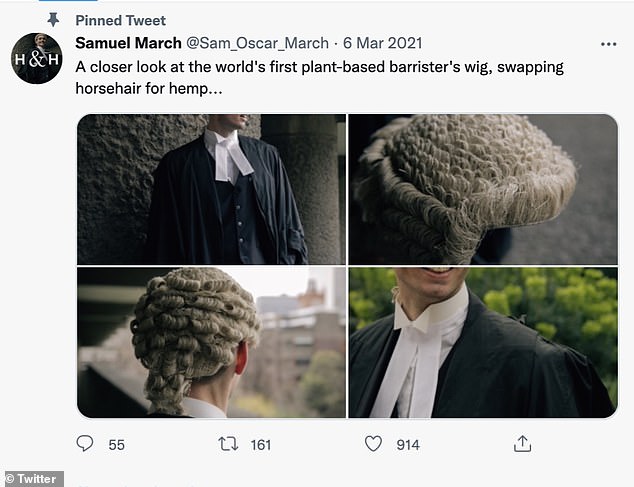 How traditional court wigs are made versus the new vegan alternative

The traditional wigs worn by barristers and judges in courtrooms in England and Wales were designed by Humphrey Ravenscroft, the grandson of the founder of London tailors Ede & Ravenscroft.

In 1822, he designed them with the use of white horsehair that required neither powdering nor looping.

These vintage horsehair wigs can sell for up to £466 online.

Its new design sees white horsehair replaced with hemp, which comes from the same species of plant as cannabis but contains just 0.3% tetrahydrocannabinol (THC) – the chemical responsible for the psychological effects of marijuana.

He said he did it because he opposes all forms of animal exploitation.

As word of the wigs spread, many vegan lawyers, or those going to the bar, contacted Mr. March who has since made them available to everyone. He has so far sold ten of the toupees for £600 each.

Hemp is the same species of plant as cannabis but, unlike cannabis, it contains less than 0.3% tetrahydrocannabinol (THC) – the chemical responsible for the psychological effect of marijuana.

It can be used to make materials and resources such as ropes, textiles, clothing, shoes, food, paper, bioplastics, biofuels, and insulation.

On his website, Mr March, who is a barrister at 9 King’s Bench Walk, said: “As a vegan, I oppose all forms of animal exploitation, wanton cruelty like bullfighting or fox hunting, to the industrial-scale cruelty of factory farming, to more subtle forms of cruelty that nevertheless involve the ownership and commodification of animal bodies.

“For me, horsehair is on the last end.

“Of course, it’s conceivable that there are ways to take this without immediate physical pain, but that doesn’t mean it’s not exploitative.

“I refuse to sponsor exploitation by buying expensive items made from animal products because it adds value to the practice of owning them and selling them for coins.

“As the talk of my wig was being talked about, I was delighted to learn that there were so many other vegans at the bar or on their way to this one.

“As a result, I decided to make wigs accessible to everyone.”

He says all proceeds from the wigs will go to causes that use the law to advance animal welfare.

The Cambridge graduate appeared to make a cannabis connection joke when he plugged in his new website earlier this month.

He joked: “The intention to provide…

‘The world’s first plant-based wig for lawyers is now available to order. 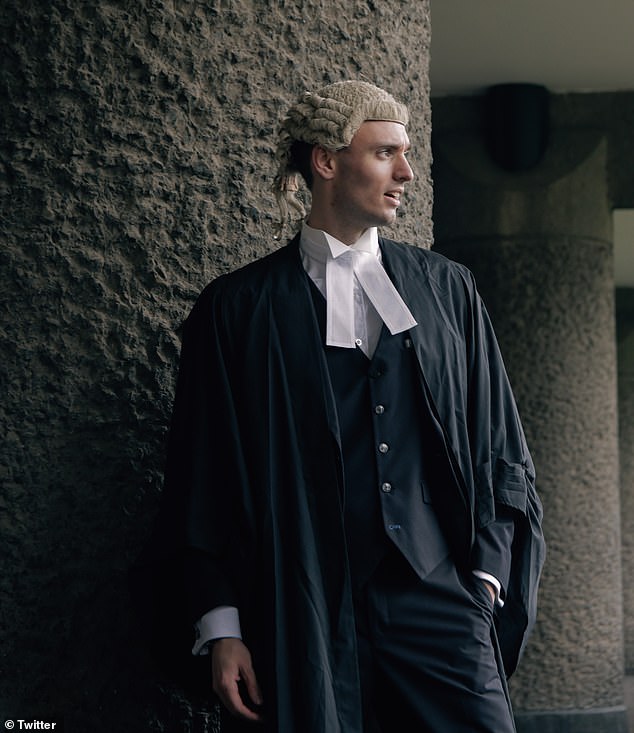 Mr March said he designed the new wigs because he opposes all forms of animal exploitation. Traditional court wigs are made from white horsehair

“It replaces horsehair with hemp and is 100% vegan.”

Rob Jacques joked: “Can you smoke it while you wait for the performer to come over from Ipswich?”

Mike Fothergill joked, “Let’s just say you could still smoke it in times of stress!”

Last month, a prominent black lawyer claimed that traditional 17th-century court wigs were “culturally insensitive” and should be banned.

It came after Michael Etienne, a black lawyer with an afro, was told he could be in contempt of court if he refused to wear one – before suggesting the tradition was an example of “hair discrimination”.

The trend of wearing white wigs was started by Louis XIV of France.

In the mid-17th century, a bald scalp was considered a sign that someone had contracted syphilis.

Hair loss is a rare symptom of the disease, which can occur in the secondary stage of the infection.

But to distance himself from any association with syphilis, the king disguised his scalp using a wig.

This trend quickly spread to the upper and middle classes in Europe, including Britain, where Charles II followed suit.

Courts, however, have been slower to embrace the trend, with many continuing to sport their natural hair in their court portraits.

By the 1820s wigs had fallen out of fashion, but coachmen, bishops and lawyers continued to wear them.

Coachmen and bishops stopped in the mid-1830s, but again the courts continued the tradition.

Wigs are still worn in criminal cases and some attorneys choose to wear them in civil proceedings.

There are a number of reasons why lawyers still wear wigs.

The most accepted is that it brings a sense of formality and solemnity to proceedings. Wearing a robe and wig, a lawyer represents the rich history of the common law and the supremacy of procedural law. There have also been arguments that wearing a wig provides a visual separation between the law and those that precede it.

A judge may suspend court attire at his or her own disposal, perhaps where it may intimidate children in court or during periods of hot weather. Therefore, it’s really about symbolism more than any rules.

Copyright © 2022 Albuquerque Journal The state Supreme Court on Wednesday ordered the indefinite suspension of the license of Albuquerque lawyer Victor Marshall over charges he brought against the impartiality of a former Court of Appeal judge in a major water rights case in 2009. The judges delivered their decision after hearing arguments from Marshall, […]

in All News / By: BVI News May 2, 2022 8:04 AM / Lawyer Daniel Fligelstone Davies of Silk Legal. A local lawyer who helped represent Members of the House of Assembly (HOA) at the Committee of Inquiry (COI) has argued that the United Kingdom (UK) is after BVI resources and has no interest in […]

Supreme Court lawyer Seema Kushwaha, who joined the Bahujan Samaj Party (BSP) last week said the 2020 Hathras gang rape and murder case is an example of how Dalits continue to be oppressed. As a lawyer, Kushwaha has represented the families of Hathras victim and Delhi gang rape victim in 2012. The 39-year-old is likely […]